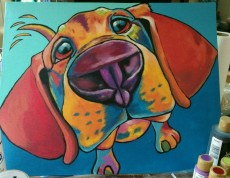 My rendition of a Ron Burns painting

Whenever I visit my uncle who hosts the family reunion on my dad’s side, I like to leave a silly painting as a thank you gift. Last year, I left a rendition of one of Ron Burns’ pieces featuring a dog. I love Burns’ colorful animal paintings!

My uncle was so taken with the finished product that we schemed to have me do a sign the next time I came down. (He normally never asks for anything!) People in the area love traditional tobacco signs painted on barns. I love taking on projects I’ve never tried before. Plus, I really wanted to do this for my uncle who gives so selflessly without accepting anything in return.

His plan was to get a 4 foot by 8 foot piece of treated plywood. I’d paint the sign on the plywood instead of directly on the structure. After completing it, he’d hoist it up and attach it on the gable of his old tobacco barn. Simple enough, right?

He wanted a Mail Pouch Tobacco sign. You can do an online search and see lots of examples of them painted on the sides of barns. I designed a simple version that would fit on the 4 by 8 foot sheet and brought it with me on my recent trip.

It should have been easy to quickly execute the painting but it took almost one week of steady, stubborn progress in his workshop in the barn.

Part of the reason it took so long was because I really should have used the metric system to scale the image. But I didn’t.

The other thing I could have done was use stencils. But, noooooo. I had to draw all the letters by hand. What was I thinking?! It’s harder to draw decent looking letters by hand than you might think. It is for me anyway. I ended up with a heavily marked surface of pencil lines as well as a collection of codes to try to help me know which lines I needed to follow when I started to paint. True, it would have been easier to erase the lines but the eraser was useless on that surface.

And then there was the hell of brushes I applied the paint with. At first, I used a standard set of brushes normally used to paint a solid block of color on large surfaces. These brushes were gargantuan for the sharp corners and narrow spaces I needed to paint. When I brought those brushes I wasn’t worried about their size because I originally planned to use masking for each color.

But then my husband encouraged me to forgo masking for hand painted edges. I bought into his argument but quickly realized the brushes would be a huge problem. I was screwed but still thought I could fake my way through the entire painting. Ha!

I worked until I thought I was going cross-eyed staring at the confusing mish-mash of pencil lines I sketched on the board.  I kept trying to paint crisp, clean lines freehand with a large brush not designed for painting crisp, clean lines. Plus, I was at risk of melting away in the oppressive heat and humidity.

It was well into painting the black areas that I cried foul. I’d been using the best brush I had for this more fine work: a 2 1/2 inch paintbrush designed for cutting in paint around window and doorframes. But looking ahead to the much smaller letters to come, I knew I’d never manage it with the brushes I had without losing my mind.

I showed myself mercy and tracked down a cheap set of fine artist paint brushes in the closest store that carried them (half an hour away). This marked the end of the detour toward insanity, allowing me to return to tedium instead.

My aunts, uncles, and cousins checked in frequently to watch the progress. When my family wasn’t popping in, a chicken clucked loudly in the rafters. At the time, I thought she must be irritated that I had invaded her domain with a steady stream of profanity. She wasn’t irritated enough to poop on the work in progress though. That made the bird okay in my book no matter how much she prattled on.

The painting eventually came together. I liked it enough to share it on this blog. What surprised me most was my aunts’ and uncles’ response. They gushed over it. I had no idea of their love for barn signs much less how deep that love ran. It was almost as if I gathered an insight into their souls that I never quite had before.

After completing the sign, attaching it to the barn was the next problem that had to be solved. My uncle took on the challenge with the help of his brother-in-law and my husband.

I thought it would be an engineering feat getting the completed sign in place without anyone getting hurt or destroying the sign. I thought it would take a solid day to get pulleys and rope in place and find a tall enough ladder. I doubted I’d be there to see the sign put in place.

My uncle formulated a loose plan involving the longest ladder he had available, pushing the heavy sign in front of him on the ladder, then supplementing the ladder height with his pickup truck to completely attach the work.

He said he needed to go change his shoes but by the time he was halfway up the ladder, he decided he might as well just finish the job and not worry about the impracticality of working on the ladder in Crocs™.

Rather than take the entire day I anticipated it would take, he completed the job in about half an hour. (I’m screaming inside.) The only injury was a small scrape on his forearm.

My uncle now has the sign he wanted and I got to try something new. It would have been a simple, straightforward project in another person’s hands.

Were I to do the project all over knowing what I know now, it would have gone very differently. But I only know it now because of that experience. It’s not a chicken and egg situation.

Which brings me to that chicken in the rafters. I wonder if she had to learn not to lay eggs on those high beams and if any eggs were sacrificed in that education. I doubt it. I think she was just up there laughing at me the whole time.

View all posts by angela

This site uses Akismet to reduce spam. Learn how your comment data is processed.